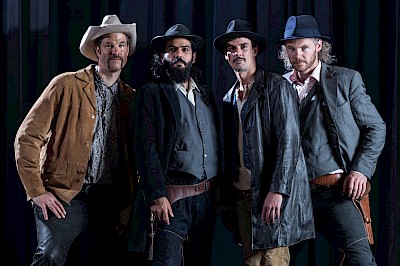 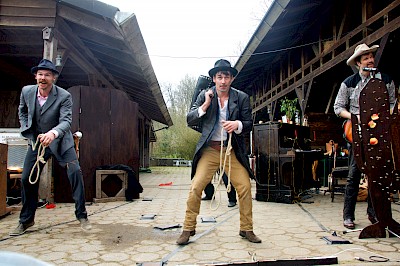 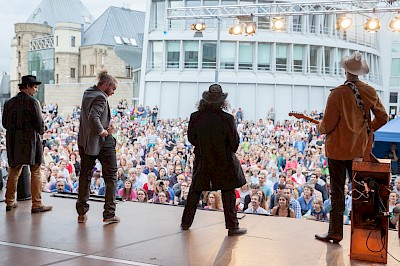 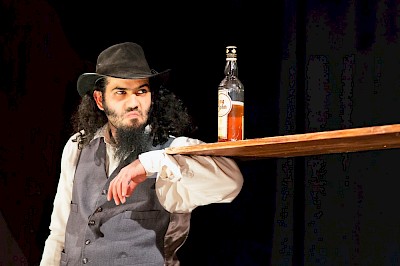 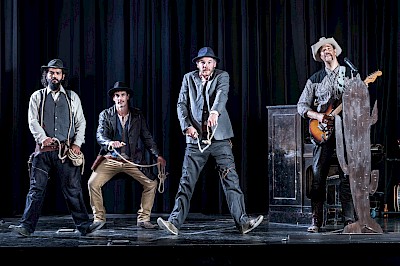 Being a man - is not easy

Imagine: you’re at home after a long day of hard work. Still some housework to do. While hoovering, you transform into a Western hero and become one of those tough guys from the Western movies of your childhood... This is exactly what happens to Frank, who gives the audience a taste of how it feels to walk through creaking saloon doors with a grim look, to ride the prairie, to get in a fistfight, or to sit around the campfire with Alison, Johnston, and Slicky, digging deep into the philosophy of Westerns accompanied by the voices of famous heroes of the silver screen. Longjohn is about being a man. It brutally examines the characteristics that we assign to this role in our society today, presenting pure archetypes, stereotypes at their best.

The basis for the show is the Western genre and its numerous clichés. The Western, symbol of the border between nature and civilization, depicts a time in which a man could still be a man – was allowed to be and had to be. Longjohn plays on many levels with borders and frontiers. The actors in the performance are limited to expressing themselves by playing back recordings of lines from Western movies. In preparation, several films were scoured, with the clips compiled and made digitally available to the performers. Together, acting and soundtrack turn the stage into a movie screen.

A play for everyone, because men love cowboys – and women love men.

Longjohn has been created by the ensemble Der Weisse Knopf (Cologne, Germany). The four tough guys on stage are directed by – of course – a female director.

Currently this performance is only available in the German language.

best for ca 400 people
(depending on stage situation)
> 8