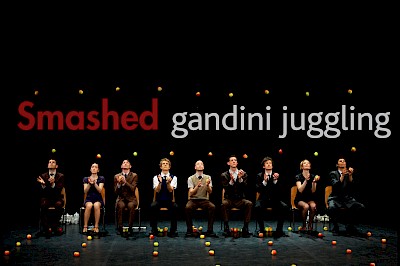 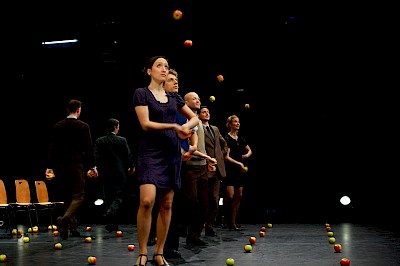 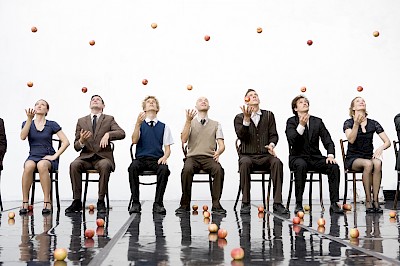 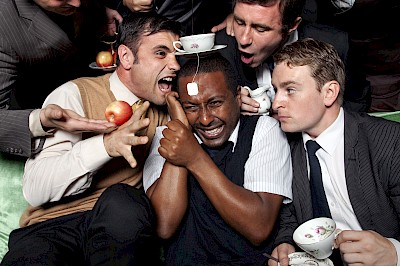 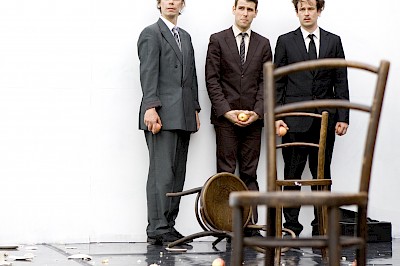 This is Smashed. But not the one you know. Gandini Juggling proudly announce SMASHED 2 To been seen at GDIF festival, August 30 + 31.

In Smashed, the manipulation of the forbidden fruit took a sagacious look at the strained relations between seven men and two women, kindly flaying traditional juggling and contemporary circus.

Smashed 2 is the dark art of juggling revisited. Turning the tables on one of the most celebrated contemporary circus pieces of the last decade. 7 women and 2 men. This is a tale of retribution. This is the same but different. Smashed 2 lightly disrupts the rigid conventions of etiquette, dress and body language. The result is a new hybrid of juggling which is performed with meticulous unison and split- second timing. This funny, inventive and characterful work is akin to dance theatre and will challenge your perception of contemporary juggling.

Perfomed on street theatre festivals in UK in 2020, also Smashed 2 will be growing to a full stage play within soon and touring worldwide on stage and street.

May 7 - 9.: Smashed by Gandini Juggling will open the series of circus show at Ruhrfestspiele 2020

“Smashed” is an hour-long piece involving nine skilled jugglers, 100 red apples, and a soundtrack featuring popular songs ranging from Tammy Wynette to Music Hall and Bach. A series of nostalgic filmic scenes explore conflict, tense relationships, lost love, and afternoon tea. This funny, inventive, and characterful work is akin to dance theatre and will challenge your perception of contemporary juggling. This is a tea party you won’t forget!

A mesmerising mix of circus and theatre inspired by the work of Pina Bausch, Smashed is a series of nostalgic filmic scenes exploring conflict, lost love, and quaint afternoon tea. Composed of tableaux vivants that give a sense of old photographs, echoing world wars, tense relationships, lost love and innocence, nostalgia, and the quaintness of afternoon tea, this Bauschian Tanzjonglage performance culminates with a cathartic smashing of apples and breaking of crockery.

Provocative, witty, jubilatory and astonishing to see. Welcome to the dark art of juggling!